Mega Jump is an awesome free game for iPhone and Android that I’ve been playing a lot lately. You’re basically a little critter that jumps and grabs coins. Each coin you grab boosts you vertically a little farther, and you try to keep jumping from coin to coin to keep going. Along the way you can get power-ups that will help you get coins, go higher, or protect you from harm.

Here are a few tips to get you started:

What are you waiting for? Download it now from the iPhone App Store and Android Market.

I discovered something fun to do by complete accident. My wife sent me a text message from one of the iPhones at the Apple store while we were playing with them. Today I got two more messages from that same device. I promptly replied:

Don’t buy an iPhone 4, get an Android instead! AT&T sucks!

Now I wish I’d gotten all the iPhone numbers.

These are five iPhone games that I really like and/or spent hours playing.

Words with Friends. Variant of Scrabble. Play 1 on 1 against friends or random opponents. Paying not to see ads is totally worth it.

Electric Box. Make 50 Rube Goldberg Machines to get electricity from A to B. Play for free on the web, or take it with you on the iPhone.

Azkend. Match 3 puzzle game with fun power-ups, great artwork, sound effects, and interface. Get it for your desktop or iPhone.

Drop7. Simple falling number puzzle game. Match the numbers on the circles to the number of circles in the row or column to clear.

Last night I called about 50 (FIFTY!) different scalpers, first calling the greediest – those wanting over $1,000 for iPhones.

I started having them deliver my new iPhone to my “home” on Lincoln. Hint: this “home” of mine has a big AT&T sign above the door. I made a point of calling those that would have at least a 30 minute drive, too. For those on the Westside, I sent them to a store in Hollywood.

But then some of them wanted to meet in a public place, and they suggested the In ‘n Out near my “home.” When they started to arrive, some would call, I’d ask what they were wearing, and I’d tell them I was wearing what the last guy I spoke to was wearing.

I can see it now. “Are you the guy that wants my easy-to-get, available in every Apple Store iPhone, but wants to pay over $1,000 cash in the middle of the night for it?” “Why no, I’m trying to dump mine too!”

But it gets better. I started suggesting the 7-11 on Lincoln in Venice. Once about a dozen of them were there, all getting kinda pissed – they kept calling saying that there were others there (I told them I wanted to buy a bunch of them), once I got a good crowd going, I showed up… AS ONE OF THEM!

I pretended I was one of them, and got to hear their tales of woe, spending all day in line to try to scalp, but now it looked like they were getting screwed.

Oh, it was a hoot. Yes, I know, bring on the hate. But I gotta tell ya, it was FUCKING HILARIOUS to see all of these 20-something losers who spent their rent money so they could try to fuck with proper sales to actual buyers that would activate the phone immediately. They were trying to mess with my Apple stock investment!

And now this morning their prices have dropped by hundreds of dollars, now they are down to no more than a few hundred over retail for most of the ads. So I did you, dear buyer, a huge favor, by wasting their time and making them wait overnight to sell, now there are more on the market, and people can see that it’s easily available at Apple stores.

Anyway, it was a fun two hours of my night. And they can try to get me on the phone again, but they never will, because the number I gave them is from a throwaway cell phone number, it’s a spare phone of mine.

There’s something about Craigslist anonymity that brings out the best in people.

They made this awesome map:

And this awesomer comic: 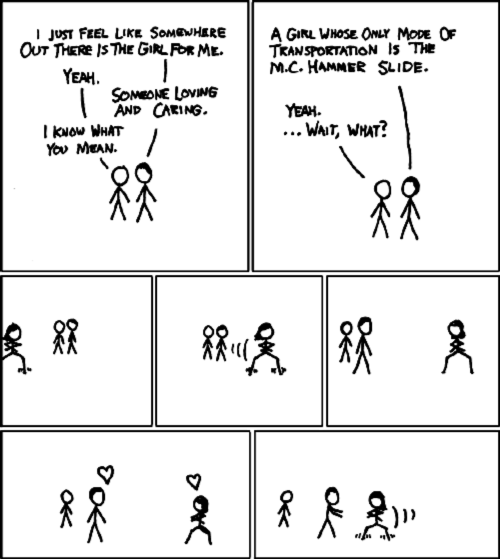 They is probably he.

Son of a bitch. I just realized there’s additional commentary in the title attribute of every image.

"Your opponent cannot fold if you do not bet or raise." –Abdul